Steve Antin
Troy Perkins is a friend of Andy and Stef. He lives with his father in the Hillside district of Astoria and looks down on those who live in the Goon Docks.

Troy has short brown hair. He wears a blue, yellow, and cream colored letterman jacket and a pair of jeans. During his drive with Andy and Stef, he has on a white Astoria Country Club visor. At the country club, he wears an orange jumpsuit.

Troy is giving Andy and Stef a ride in his Ford Mustang, where he's not-so-obviously using the rear view mirror to look up Andy's skirt; he has given her one of his country club jackets to wear in the fall weather. When they come across Brand on a little girl's bicycle, he pins Brand's hand to the side of his car, sending him careening over the edge of a large hill. Unimpressed with this and his creepy behavior, Andy elbows his lip and the girls leave.

He arrives at the Astoria Country Club and is blown off of a toilet from reverse pressure caused by the Goonies below. Later, he and two friends go to hang out at the Moss Garden Wishing Well, where he jokes about a blooming relationship with Andy. When he flips a coin down into the well and it flips back up into his hands, he discovers Andy and the Goonies are down below. She begs him to reel a bucket down to save them, which he does. When it's pulled back up, however, he finds only his country club jacket attached to it. He disgraces Andy by calling her a Goonie.

The following morning, he accompanies his father down to watch Irving Walsh sign off his house. But Troy is dismayed to learn that the goonies manages to save their house from foreclosure.

Behind the scenes[edit | edit source]

Troy is portrayed by Steve Antin. It is possible that he was meant to be Andy's boyfriend in early drafts of the film, as he is described as such by Josh Brolin in an interview.[1] He also originally had a scene following the well one, where he bumps into the Sheriff and lies about not having seen the missing Goonies.

He appears in the Stop 'N Snack deleted scene where he torments the Goonies and pretends to smoke the map, going as far as to set the edges on fire.

Troy appears in one of the many Goonies video games, where he causes hazardous water to drop out of ceiling pipes. 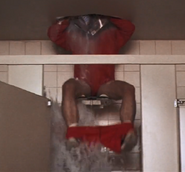 Troy hanging around the wishing well with his buddies. 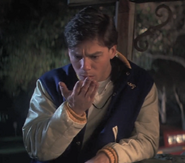 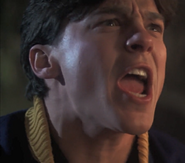 "Andy! You Goonie!"
Add a photo to this gallery

Retrieved from "https://goonies.fandom.com/wiki/Troy_Perkins?oldid=6580"
Community content is available under CC-BY-SA unless otherwise noted.