The Goonies II (Japanese: グーニーズ2 フラッテリー最後の挑戦, The Goonies II: The Fratellis' Last Stand) is a 1987 adventure video game developed and produced by Konami for the Nintendo Family Computer and Nintendo Entertainment System. It is the sequel to the 1986 video game The Goonies.

The Goonies II plays as a sidescrolling platformer with Metroidvania elements, such as a large map the player must explore. It also features rooms that shifts the perspective to first-person, with a menu of options to interact with them, such as hitting, moving, and using a variety of items picked up while adventuring around.

Like the prequel, the player controls Mikey. He has multiple ways of attacking enemies: a short-range yo-yo, a ranged and limited ammo slingshot, and a slow-moving boomerang. Additional items like bombs and Molotov cocktails can be found lying around and can be used in combat; Mikey can only carry a limited supply of each and upgrades to his max capacity are earned as the game progresses.

Enemies on the platforming portion of the game range from normal animals (birds, snakes, spiders) to aquatic ones (sharks, piranhas, and octopi) to mythical creatures (dragons, skeletons, and ghosts). Defeating enemies will cause them to drop health refills, keys, additional slingshot ammo, or more bombs and Molotov cocktails. The Fratelli brothers also make an appearance in The Goonies II; like the prequel, they can only be stunned temporarily.

Within the first-person section are a number of NPCs. These can be talked to for hints or hit by Mikey, which can result in them giving helpful items. Certain rooms also act as "warp zones", which allow Mikey to move between two parts of the map.

True to its Metroidvania style, there are no set "levels" like the prequel. Areas of the map include a restaurant (possibly meant to represent the Lighthouse Lounge), a cave system, a waterfall area, a series of ice caves, an underwater area, and an active volcano. There also is a suspension bridge which links one map area to the other. An enemy unique to the bridge is a flying iron mask who will eat the player's boomerang if attacked with it or comes into contact with Mikey, and a message found in one of the safes warns of this "Be careful on bridge not to lose boomerang".

There are a number of useful items and pieces of equipment Mikey can pick up as he explores the area. These include:

Unlike the other Goonies game, The Goonies II features an original story. Following the events of the movie/first game, the Fratellis have broken out from jail. Exacting revenge on the Goonies, they capture all but Mikey and lock them away. They've also kidnapped a mermaid from the ocean named Annie. Mikey adventures off by himself to save his friends, as well as Annie, from the clutches of the criminal family.

All six Goonies must be saved before Annie can be saved. After saving Annie, he is rewarded with a brief romantic remark, where she is freed back to the sea. A scene is then shown where the Fratellis are escorted into a police "paddy wagon" and a news reporter commends the player for the rescue of the Goonies and how "peace has come again to the town of Goon Docks".

The Goonies II was re-released in 1988 as a part of the popular PlayChoice 10 arcade cabinet.

The Japanese box art for The Goonies II. 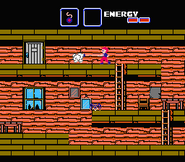 A screenshot of the platformer gameplay. 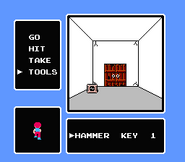 A screenshot of the first-person gameplay.