For the other Goonies video games, see The Goonies (disambiguation).

The Goonies is a 1986 platform video game based on the film of the same name, developed and produced by Konami for the Nintendo Family Computer. It was never released outside of Japan. It had a sequel: The Goonies II.

The Goonies plays as a sidescrolling platform game with Mikey as the player character. He has various ways of interacting with his surroundings: a kick that can help protect the player, a series of bombs that can damage Mikey if the player isn't careful, and a slingshot that can be fired from a distance.

The game loosely follows the plot of the movie, with each level corresponding to a major setting in the movie (such as the Lighthouse Lounge and the Inferno). The rest of the Goonies have been captured, with one locked away in each level. Mikey must find three keys in each level to save them, and every Goonie must be saved in order to play the final level of the game, where the player saves Andy.

Enemies include brown rats, bats, skeletons, octopus, fish, and a grim reaper. The Fratellis also follow him around levels and can only be stunned temporarily. Jake Fratelli can "sing" and shoot out musical notes as an attack, and Francis Fratelli can fire a gun.

The Goonies was re-released within its year of released for the PC-88 and Sharp X1 home computers.

Despite the game not having an official release outside of Japan, the game was published by Nintendo in 1987 globally as an VS. System arcade game, VS. The Goonies, which added support for competitive two-player play. It was included on the popular PlayChoice 10 arcade cabinet.

It was re-released again, this time in 1988 in disk format for the Famicom Disk System. 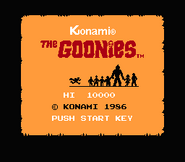 The title screen for the Famicom release of the game.

The title screen as it appears for the PC-88 and X1 releases of the game. 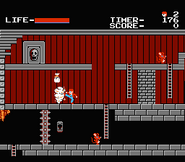 The restaurant level from the Famicom release. 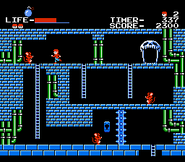 The pipes level from the Famicom release. 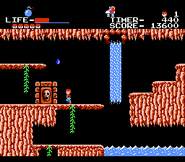 The waterfall level from the Famicom release. 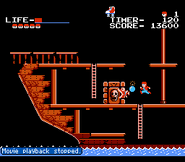 The ship level from the Famicom release.