Cyndi Lauper, Lennie Petze
"The Goonies 'R' Good Enough" is a 1985 song by Cyndi Lauper featured on the official soundtrack for The Goonies. It was released as a single with a two-part music video to coincide with the movie's release.

The song was initially meant to be called "Good Enough", but Warner Brothers had her include the name of the movie into the song. Until 2003, it was not on any of Lauper's albums, as she hated the song. It was not performed live after 1987 for seventeen years, when she sang the song a cappella on stage in 2004. Since then, the song has been incorporated back into her set lists due to fan demand.

The track appears twice in the movie: once while Brand is trapped to a sofa couch, and then again during the credits.

A dance remix of the song was included in the 2008 re-issue of the soundtrack.

The music video for "The Goonies 'R' Good Enough" is split into two parts. A number of World Wide Federation wrestlers acted in the videos alongside Steven Spielberg, Lauper's real-life mother, and the Goonies themselves (save for Kerri Green). Lauper also had The Bangles, friends of hers before their fame, play parts as pirates. It was directed by Richard Donner, the director of The Goonies. It was partially filmed on the set of the movie.

The first part of the music video aired weeks before the release of the movie, with the second part airing after the film was in theaters.

Cyndi's family owns a quirky gas station with free cookies and a stand that sells vegetables on the side. Her father laments not knowing the location of his great great grandfather's treasure. A limo pulls through the gas station and out come the creditors looking to buy out the place. They demand Cyndi's family pay up; as they and her parents start to argue, and as more creditors arrive and start to make changes, Cyndi starts to move their possessions outside. Removing the large portrait of Great Great Grandfather Peg-Legged Booze-Guzzling Mean Lou Albano, she discovers a hole in the wall leading to a hidden cave.

Crawling through it, Cyndi discovers a skeleton with a map, which she takes. Out of thin air, the Goonies appear with a map of their own. As they compare the two, clips from the film plays. An old sea hag and pirates appear and interrupt them. The Goonies are captured, but Cyndi escapes.

Back at the gas station, her boyfriend Dave and friend Wendi discover the cave and start to crawl through it.

After adventuring through caves, running away from the hag and pirates, finding another skeleton and a group of Benihana chefs, Cyndi is surrounded on a fallen mast over a waterfall. As the song concludes, she cries out for help from Steven Spielberg. Back in his office, watching the music video, he starts to provide an answer before realizing he has no idea either.

With Cyndi captured now, the pirates and sea hag have moved her and the Goonies to the Inferno, where they are forced to make sushi for them. Dave and Wendi have been captured as well, and are tied to the ship's mast. The sea hag orders Cyndi to help, who has to cut up pieces of octopus tentacle for more sushi.

Wendi and Dave wrestle themselves free from their bindings. They sneak across the ship and subdue the hag; as the Goonies also free themselves, they pitch in to help. With her taken care of, they're free to the ship's treasure. More clips from the film play here.

To distract the pirate crew so they can escape, they toss a portion of the treasure to them, and they begin to argue and wrestle over it. Cyndi and her friends jump overboard and, in the end, hand off their treasure to Cyndi, who exits the caves with Dave and Wendi. Despite having honest pirate treasure, the creditors refuse it. Fed up with everything, she whistles out and Andre the Giant appears and chases them all off. Cydni, her family, and friends all live "happily ever after". 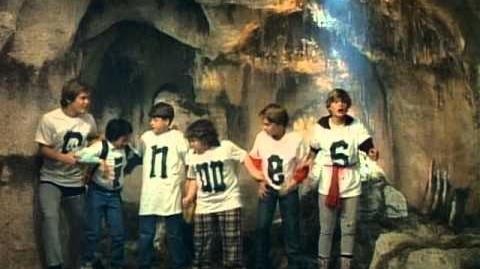 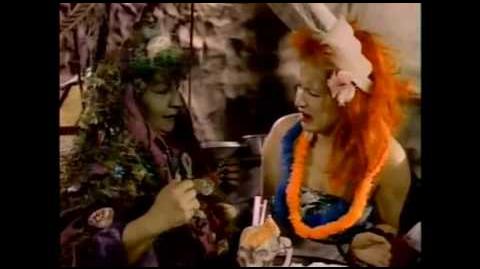