Leader of The Goonies

Michael Walsh, often shortened to Mikey, is the de facto leader of the Goonies. He lives in the Goon Docks of Astoria, Oregon. He is the younger son of Irving and Irene Walsh, and brother of Brand.

Mikey has short brown hair and green eyes. He has braces. Throughout the movie, he wears a jean jacket, a gray shirt, a pair of jeans, and white sneakers. On the bike ride down to Cannon Beach, he dons a yellow raincoat. He is asthmatic and never goes anywhere without his inhaler.

When Mikey was younger, his father used to tell him various stories of grand adventure, including the story of One-Eyed Willy.

On the eve of the Goon Docks being signed off to Mr. Perkins, the Goonies come together for one last hangout session. After they cause a ruckus and break both the door and his mom's favorite statue, he tries to reign them in as they explored the attic. While up there, he discovers an old map trapped behind a case; handing it over to Chunk, it breaks and he is able to pull it out to read. With Mouth translating, they come to the conclusion together that the old pirate's treasure could save the Goon Docks. Trapping Brand against a chair, they take off on their bikes, against his mother's wishes to stay in to avoid poor weather.

Mikey uses the doubloon included with the map, lining up Haystack Rock with the Lighthouse Lounge. The boys march over, hiding behind a bush to watch a patron of the Lounge enter. Nosy and eager to find the lost treasure, he goes inside with the others where he is confronted by Mama Fratelli, accidentally calling her "sir" instead of "ma'am". Mikey fakes having to use the bathroom to sneak down to the basement to search for clues; here he encounters an It trapped down there, chained to the wall. He rushes back upstairs to tell the Goonies about everything but is caught by his brother, who tries to drag him home. Andy helps the Goonies in the long run, trying to take the time to flirt and be close to Brand while he and the others investigate downstairs. In an attempt to show everyone the It, he's scared backward and into another room. Here, he picks up a fire tool and attempts to dig through the ground. Brand argues there is no treasure, but due to Chunk breaking something yet again, they discover a hidden passage down below the building. After wrestling with a dead body and hiding from the Fratellis having returned, he persuades Brand that the only way out is through the hidden passage.

Down in the caves, he and the Goonies encounter a set of pipes that connect to the Astoria Country Club but fail to get the attention of anyone above ground. When they discover Chester Copperpot's body, Mikey is goaded into rifling through his things, discovering his wallet, as well as a copper medallion somehow tied into finding the treasure. He is the one to set off the first booby trap they encounter.

Eventually, he and the Goonies discover a "waterfall" and a trove of treasure; this turns out to be the Moss Garden Wishing Well, and all the coins are modern currency. When Andy attempts to ride up the bucket, he delivers an impassioned speech about why it's important they not give up. When they discover Troy and his friends are above, everyone but Mikey is eager to leave. He realizes that Chester Copperpot died earlier and that, if they survived past that, they have a chance to find the "rich stuff". When the map calls for "Copper Bones" and "triple stones" to progress, he discovers a set of rocks embedded in the wall. After lining his key up with one set, he activates another booby trap, this one nearly killing Data in the process while also opening the way up.

Down further, when trying to read the map, Mikey calls for a "pee break". When Andy starts calling out for Brand, he is sent by him to go check on her. In the dark, Andy pulls him in for a kiss, thinking he's Brand all the while. Stef shows him the way out.

When the Fratellis finally catch up to them, Mikey and friends cross over a waterfall on a log; he watches Andy play the Bone Organ, scared for his life. The way down finally opens and Mikey rides a waterslide to a huge lagoon housing the Inferno. Climbing up to the ship, he explores until they hit a dead end with the ship, where almost everyone argues with him about the location of the treasure. Andy accidentally sets off another trap, showing the way above, barred off by a piece of wood. Mikey breaks through the barrier and climbs up to discover the skeletons of One-Eyed Willy and his crew. He has a moment with Willy, talking to him and discovering that he does in fact only have one eye; he names him the "First Goonie" in reverence and because of this. He is then surprised to see the others on deck, who seem to look at him funny for talking to a skeleton, but the subject is quickly changed when Mikey orders everyone to load up on the treasure. The Goonies start looting doubloons and jewels, but when Mouth looks to take some gold coins from a scale, Mikey baps Mouth's hand away, saying "Except for that...that is Willy's", whereby doing so the Goonies avoid a trap. Here, Mikey empties out his marble bag and fills it with several gems. He comes up with a clever way to trick the Fratellis, based on something he saw on The Hardy Boys, but it's explained too little too late.

The Fratellis have arrived, again, and Mikey has to give up the treasure he's accumulated (save for his marble bag, tucked away in his jacket). He's rounded up with the others to be tossed overboard but is spared when Chunk and Sloth arrive. Escaping overboard anyway, he swims away, lamenting the loss of the treasure. He arrives back out onto the beach with the Goonies, and are saved by two cops. He discards his inhaler at this point, feeling it's unnecessary after everything that happened. When his parents arrive, he apologizes to his father for losing the treasure and watches the Goon Docks be signed away to the Perkins, only for it to be cut off by Rosalita, the housemaid his mom hired the day before. She pulls out his marble bag from his jacket, and Mikey exclaims about it and the Goon Docks being saved. When One-Eyed Willy's ship is seen sailing into the distance by the news crew on the scene, he sits down with his fellow Goonies to watch it.

Brand is Mikey's older brother. They argue frequently and Brand often teases and bullies him, but they have a strong brotherly bond otherwise. He respects Brand enough to not mess with his belongings, as seen when he yells at Mouth for ruining the tires on his bike.

Mouth, Data, and Chunk are Mikey's best friends. While they all have their little quirks and flaws (Chunk constantly breaking things, Mouth not knowing when to shut up, etc.), he enjoys their company.

Mikey has a bit of a crush on Andy. He offers to hold her hand before they discover the Moss Garden Wishing Well, and is accidentally kissed by her in the dark. At the end, Andy rewards him with a kiss to the chick for his bravery.

Mikey is played by Sean Astin. This was Astin's first film role.

In earlier versions of the movie, Mikey's crush on Andy is more overt. His speech he delivers at the bottom of the well is also longer, including a story about his parents going on a game show.

Mikey is the main character in the Goonies video games, such as the various versions of The Goonies, as well as The Goonies II. He also appears as a playable character in Konami Wai Wai World and Pop'n Music 10.

Mikey also appears in the music video for Cyndi Lauper's song "The Goonies 'R' Good Enough", where he is captured by a gang of pirates and is saved by Lauper's quick wit.

Mikey having a heart to heart with One-Eyed Willy. 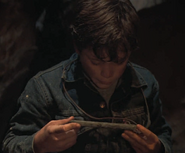