The Goonies Wiki
Register
Don't have an account?
Sign In
Advertisement
in: Articles in need of citation, Goonies, Characters,
and 2 more

Lawrence Cohen, also known as "Chunk", is a member of the Goonies. He lives in the Goon Docks in Astoria, Oregon with his family. He is a chronic liar and has a penchant for eating.

Chunk is, as his nickname might suggest, chunky. He has brown curly hair and blue eyes. He wears a black Hawaiian shirt, plaid pants, and sneakers. He later wears a red windbreaker while down on Cannon Beach.

His signature dance is the "Truffle Shuffle", where he pulls his shirt up and wiggles in place while making a number of ridiculous and embarrassing noises. While trying to get the attention of others

Chunk has previously prank called the Sheriff, claiming multiple outlandish stories and getting himself into a lot of trouble. He's also caused a lot of trouble around town, pulling pranks but causing general mischief with the people of Astoria.

He is the only member of the Goonies to see the car chase between the police and the Fratellis. Chunk excitedly hurries to the Walsh residence to tell his friends about the chase, but nobody believes him. Mouth makes him perform the Truffle Shuffle before he can enter the house proper. Inside, he breaks a statue in the living room, and is tricked into breaking a glass case in the attic. With it broken, he and Mikey notice a map inside. Determined to find the treasure it mentions to save his home, Chunk accompanies the other Goonies out on a bike ride, mostly complaining the whole time about food and the dark.

Arriving at the Lighthouse Lounge, he is the only one scared to enter, thinking it's being used by drug dealers as their den of crime. He spots the Fratellis' ORV in the garage and tries to tell them they're in a dangerous situation, but he isn't taken seriously. When the Goonies adventure downstairs, he breaks a glass water cooler, which allows Mikey to discover the hidden passage in the fireplace. Finally having enough of the day's events, he tries to walk out on his friends, only stopping when he smells ice cream in a nearby freezer. Ice cream isn't the only thing in the freezer, however, and this leads them to finding a dead FBI agent. While putting the body back in the freezer, Chunk gets stuck in there, only escaping after the Fratellis finish investigating downstairs after hearing something. Instead of joining his friends, he escapes out a window and runs to get help.

Chunk manages to find a main road and flags down a car to get a ride back into town. Unfortunately, he discovers this is the ORV and the Fratellis capture him and toss him into the back. He's driven back to the Lounge, where he's interrogated by them, threatened with kitchen appliances. He spills his entire life to them, and his story about the treasure map isn't taken seriously. He is only spared when a swarm of bats spew out of the secret entrance, at which point the Fratellis believe him, especially after he drops the doubloon that went along with the map.

While they climb down to go after the rest of the Goonies, Chunk is locked up with Sloth, the third Fratelli brother. Initially scared of him, Chunk makes quick friends with him, having bonded over a love of food. Sloth frees himself, then frees Chunk, who attempts to call the Sheriff with no success. Sloth starts to adventure down into the caves and Chunk nervously follows after him. They follow the path, coming across all the traps encountered by his friends.

Eventually, Chunk and Sloth appear on the Inferno in pirate regalia, gliding down the biggest sail on a knife. He helps his friends escape and jumps overboard with them. In the water, he introduces them to Sloth, and then is forcibly pulled away from him as Sloth seemingly sacrifices himself to let the Goonies escape from the collapsing cave.

He is reuinited with Sloth after the cops save the Goonies, with him running to his defense to keep the cops from arresting him as well.

Chunk has a rocky relationship with everyone, as his behavior of lying and telling fake stories makes it so barely anyone trusts him or believes what he has to say. This backfires and lands him into trouble multiple times, as seen with the Sheriff not believing him about the Fratellis.

While afraid of Sloth at first, Chunk bonds with him quickly. He takes on a protective role, wanting to help and take care of him once the Fratellis are arrested by the cops. He and his family adopt Sloth following the events of the film.

Chunk investigating the ORV in the Lighthouse Lounge's garage.

Chunk locked up with Sloth.

Chunk getting caught by the Fratellis.

Chunk being interrogated by the Fratellis. 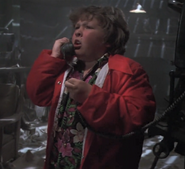 Chunk, on the phone with the Sheriff.

"No... Captain Chunk!"
Community content is available under CC-BY-SA unless otherwise noted.
Advertisement