Robert Davi
Jake Fratelli is a member of the Fratellis.

Jake has short black hair, often hidden under a trilby. He wears a white dress shirt with a black vest and a gray scarf. Over that he wears a red plaid jacket.

Jake has been arrested and is behind held in Clatsop County Jail; during lunch one day, he tricks a Prison Guard into thinking he's committed suicide, knocks him unconscious, and escapes. With his brother and mother's help, they drive off, chased by the Astoria police. Their Jeep Cherokee XJ blends in with an ORV race on the beach and they get away, back to their hideout at the Lighthouse Lounge. Later that evening, a duo of FBI agents enter the establishment to confront the Fratellis, but are shot and killed in the process.

While tending to his brother, Jake encounters his mother dealing with a group of boys. He teases Sloth and ends up not feeding him, frustrated with his response to his singing. After the boys leave, he helps dump the first body away from their base. When he returns home, he has a brief fight with his brother, before they go downstairs and discover someone has been in their hideout. While going out to dump the second corpse, they encounter Chunk; the Fratellis capture him and drag him back to the base for interrogation. When Francis discovers a doubloon when it falls out of Chunk's pocket, the Fratellis climb down into a hidden cave system under the Lighthouse Lounge, to follow after the Goonies to get One-Eyed Willy's treasure.

Along the way, Jake sets off Data's firecracker booby traps. Finally catching up to the kids, Jake slips and falls while trying to retrieve his brother on a slippery boast mast bridge; the two are immobilized when a nearby waterfall picks up in power. Climbing up the wet rocks, Jake is punched out by Data's hidden boxing glove, knocking him and his brother down. After climbing back up, they get to their feet and attempt to stop the Goonies, only for them to run off again.

Once to the lagoon and onto the Inferno, they catch the Goonies. After Data's inventions fail to fend them off, the Fratellis round up the Goonies and force them to drop their goods. While prepping to toss two of the Goonies overboard, Sloth and Chunk arrive, having broken out of confinement. Francis and Jake attempt to fight and subdue Sloth, but it devolves into an argument over his toupee. He gets tied up with his brother while Sloth confronts his mother before jumping ship.

Cut down by Mama Fratelli, they help her loot the ship; here, they set off the last of One-Eyed Willy's booby traps and the cavern begins to crumble to pieces. With the Goonies escaping to freedom, Sloth stays behind to help his family escape as well; on Cauldron Point, Jake, Francis, and Mama Fratelli are arrested by the police.

Jake is portrayed by Robert Davi. His character's interest in singing and opera comes from Davi's career as an operatic and jazz singer. Davi also notably did his own stuntwork with the "Slick Shoes" scene.[1] 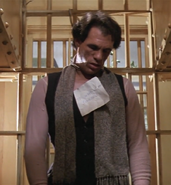 Jake faking his suicide; a pipe props him up from behind.

Jake and Francis, after slipping on the old mast bridge.