Francis Fratelli is a member of the Fratellis.

Francis has light brown hair, of which is balding over. He wears a toupee to cover his bald spot, as well as a pair of glasses. He wears a dark dress shirt with a brown vest, as well as dark pants and shoes. He wears a holster strap for his gun. In the beginning of the movie and when capturing Chunk, he is seen wearing a brown flat cap.

Helping break his brother out of Clatsop County Jail, Francis pours a tank of gasoline around the jailhouse and lights it up with a shot from his pistol. He and his family hole back up at the Lighthouse Lounge; later that evening, a duo of FBI agents enter the establishment to confront the Fratellis, but are shot and killed in the process.

He helps dump the first body away from their base. When he returns home, he has a brief fight with his brother, before they go downstairs and discover someone has been in their hideout. While going out to dump the second corpse, they encounter Chunk; the Fratellis capture him and drag him back to the base for interrogation. Francis discovers the doubloon when it falls out of Chunk's pocket; now believing there's a hidden cave system under the Lighthouse Lounge, Francis locks Chunk up with his brother, Sloth, so that he and his family can climb down to follow after the Goonies to get One-Eyed Willy's treasure.

Finally catching up to the kids, Francis slips and painfully falls on a wet boat mast acting as a bridge. Jake slips and falls too, and the two are immobilized when a nearby waterfall picks up in power. Climbing up the wet rocks, Jake gets punched out by Data's hidden boxing glove, and they have to redo the process. When they get to their feet, Francis drops and then aims his gun at Andy and Brand, but they get away just in time. The Fratellis follow, and Francis has to pull Jake along, who's too afraid to pass over a large gap in the floor.

Once to the lagoon and onto the Inferno, they catch the Goonies. Data confronts the criminals though, and his Pinchers of Power latch onto Francis' crotch, and he struggles to get it off. After Data's inventions fail to fend them off, the Fratellis round up the Goonies and force them to drop their goods. While prepping to toss two of the Goonies overboard, Sloth and Chunk arrive, having broken out of confinement. Francis and Jake attempt to fight and subdue Sloth, but it devolves into an argument over his toupee. He gets tied up with his brother while Sloth confronts his mother before jumping ship.

Cut down by Mama Fratelli, they help her loot the ship; here, they set off the last of One-Eyed Willy's booby traps and the cavern begins to crumble to pieces. With the Goonies escaping to freedom, Sloth stays behind to help his family escape as well; on Cauldron Point, he, Jake, and his mom are arrested by the police.

Francis is portrayed by Joe Pantoliano. 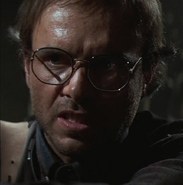