The doubloon was a specific coin included with One-Eyed Willy's map, important to deciphering the location of his treasure.

Little is known of the coin's history, except that it was minted in 1632, likely by the treasury of the King of Spain. At some point it came into the possession of One-Eyed Willy or one of his men, presumably through plunder. It has three small holes in it, which were likely intentionally made after Willy's men finished the network of subterranean tunnels to deduce their above ground appearance. These align with the Oregon coastline off of Cannon Beach, specifically with Haystack Rock and the Lighthouse Lounge. The doubloon itself aged with tarnish as centuries passed. At some point in time it was acquired by Irving Walsh in his duties as a historian, where is was included with One-Eyed Willy's map.

The doubloon was discovered by Mikey in the Walsh's attic, after Chunk broke the case which held it. Following the map, the Goonies arrive on Cannon Beach and use the coin to decipher the start of the Willy's secret tunnels: the Lighthouse Lounge.

Chunk holds onto it and later drops the doubloon after being interrogated by the Fratellis. Jake and Francis confirm that it appears authentic, not merely a child's toy, suggesting that Chunk was telling the truth about One-Eyed Willy's treasure.

The doubloon was made out of oxidized brass.[1] 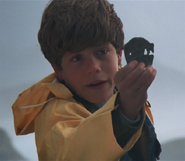 Mikey holding up the doubloon.

Francis, having discovered the doubloon.

The Fratellis examining the doubloon.

Community content is available under CC-BY-SA unless otherwise noted.
Advertisement