Brandon Walsh, often shortened to Brand, is the oldest and a member of the Goonies. He lives in the Goon Docks of Astoria with his family.

Brand is tall and muscular from his interest in working out. He has short brown hair and is seen wearing a red bandana around his head like a sweatband. He wears a sleeveless gray shirt with a dark blue hoodie over it. He also wears a pair of gray sweatpants with blue shorts, and a pair of Nike Vandal Supremes. While riding a child's bike down to find the Goonies, he also wears a dark gray vest.

Prior to the day the events of the movie take place, Brand has scheduled a date with his crush, Andy. He has also failed his driving test.

Brand is instructed by his mother to watch over his brother, Mikey, on the eve of the Goon Docks being signed away to Mr. Perkins. He joins the Goonies up in his father's attic, where he discovers numerous leftovers from the Astoria Historical Museum. He dismisses the idea of One-Eyed Willy and his lost treasure as bedtime stories, and returns to working out. Outwitted by the Goonies, he is bound and trussed to a sofa chair with his resistance bands, but is eventually only able to escape once his mom and Rosalita arrive home from the supermarket. He sets out to retrieve Mikey and has to resort to a little girl's bicycle when he discovers his bike's tires are flat.

Riding out to Ecola State Park, near Cannon Beach, he runs into Troy, Stef, and Andy; all three are riding in Troy's Ford Mustang. Amused with Brand's situation, Troy pins him to the side of his car and speeds down the road, ultimately sending him careening down a hill.

He discovers the Goonies in the Lighthouse Lounge and begins to take them home. However, Andy and Stef arrive; he flirts with Andy, which results in him allowing the boys to explore in the restaurant's basement. As they go to check out the "It", he and Andy almost kiss, but are bumped back into a nearby room. Mikey tries to find a way through the floor and Brand argues with him over the existence of the treasure. However, when Chunk accidentally breaks a water cooler, it reveals a hidden passage within a fireplace. Brand kicks his way through the false floor, revealing a cave below. When Data discovers the massive currency printer, Brand is the one to point out they're fake. After they discover the dead body in the freezer, the Fratellis arrive back at the Lounge, leaving the only way out through the secret passage.

Under ground, he tries to get the attention of anyone on the surface through a set of pipes. Later, after discovering Chester Copperpot's corpse and escaping a set of booby traps, Brand reveals a new part of the passage, only for a huge colony of bats to fly out. Down further, they discover the Moss Garden Wishing Well, as well as Troy on the surface. Brand begins to coordinate their escape, but is cut off by his brother giving a passionate speech. Moved by his words along, the Goonies continue their adventure further down. While the younger boys figure out the next step, he complains to Andy about Mikey and his incessant interest in exploring and pirate treasure.

During a bathroom break, Andy calls out for him; he sends out Mikey to check on her and misses out on a chance to kiss her. The Fratellis catch up to them, and the Goonies flee across an old ship mast. They come across an old organ made of bones, which Andy plays. Her second mistake nearly sends Brand down a giant pit of spikes and sharp rocks. With the piano puzzle solved and the way opened, he rides down a massive waterslide and lands in the lagoon where the Inferno has been housed for centuries.

On the ship, he helps Mikey up and into the treasure section before joining him up there with the Goonies. He helps loot up all the treasure, but has to drop it all when the Fratellis arrive and round them all up. When Andy is pushed overboard, Brand jumps to her rescue, diving down and saving her from drowning. Bringing her to safety, they finally kiss; Andy comments on the lack of braces, which annoys Brand. The rest of the Goonies flee to the water, and they are rejoined by Chunk and a new friend, Sloth. Trying to find a way out through a collapsed tunnel, Brand asks for a light. Data hands him a sparkling candle, which they realize is dynamite. The tunnel is blocked yet again, and Brand attempts to clear out the way. Sloth steps in to help, and the Goonies are able to escape.

Out on Cauldron Point, Brand is reunited with his family. He kisses Andy again and then goes to see his parents. Both Mikey and Brand are despondent about losing One-Eyed Willy's treasure, but are consoled by Mr. Walsh, who says that having them back alive has made the Walsh's "the richest family in Astoria". When Mr. Perkins gloats that the Perkinses are the actually the richest family in Astoria, Brand threatens to hit him, but is stopped by his parents. Rosalita discovers the marble bag full of gemstones, however, which saves his home and the others in the Goon Docks from foreclosure.

Brand has a rather typical "big brother" relationship with Mikey. His teasing and pushing around doesn't come without a protective aspect, and upright says that "nobody hits [his] brother except [him]".[1] He also bosses him around, whether it's due to his mother asking him to watch over him or trying to save him from certain death by the Fratellis or One-Eyed Willy's booby traps.

Andy and him have a romantic relationship of sorts, as he had plans for a date on the following Friday (that were complicated due to his failing a driving test). Over the course of the night, they share a number of near-kisses, up until he saves her from drowning and when they're all reunited with their families on Cauldron Point.

He and Troy do not get along whatsoever, as Troy looks down on those who live in the Goon Docks.

Brand is portrayed by Josh Brolin. This was Brolin's first film role.

An element dropped from Brand's character was claustrophobia, which acted up while the Goonies moved through the underground cave system. Promotional materials for the film mentioned this character trait, despite its cut from the movie.

Brand appears in the Stop 'N Snack deleted scene, where he comes to his brother's defense, preventing Troy from punching him. Brand attempts to take back the treasure map, but is out-tricked by Mouth. 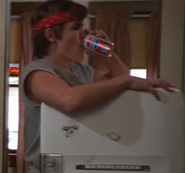 Mikey and Brand hugging after Mr. Perkins' visit to their home.

Brand trapped to a sofa chair with his own workout gear. 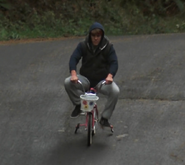 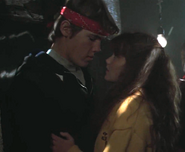 Brand and Andy about to kiss.

Brand and Andy, falling into a compromising situation. 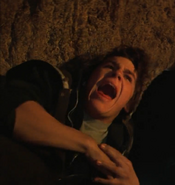 Brand and Andy about to kiss.

Community content is available under CC-BY-SA unless otherwise noted.
Advertisement